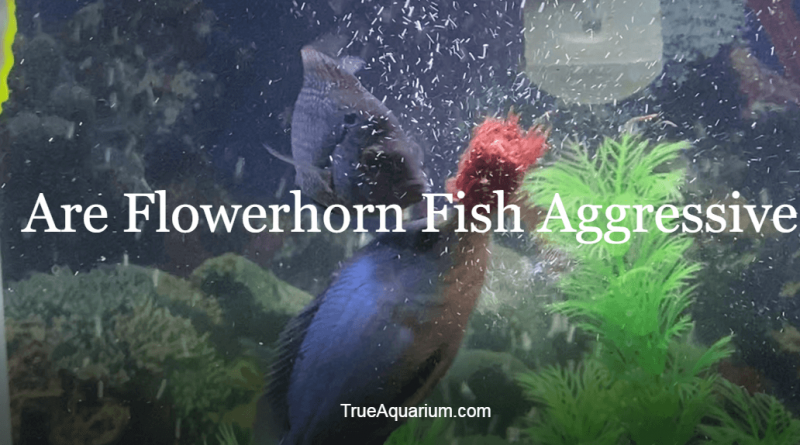 Flowerhorn fish are on the wish list of many aquatic hobbyists. The reason for this is that these fish can be fun to interact with and are interesting to observe. What puts the Flowerhorn in such demand is their unique looks and the myriad of colors and markings but there are challenges to keeping them successfully. One of the biggest obstacles many aquarium enthusiasts face is the problem of the aggressive nature of the Flowerhorn. Because of this trait, the Flowerhorn requires a little more care and caution.

Are Flowerhorn Fish Aggressive? Yes, Flowerhorn are aggressive toward most tankmates. There are various reasons for Flowerhorn aggression and it may seem like you will never be able to master handling that behavior. However, it is far from impossible. Making sure that you understand the reasons are behind the aggression is important. Further, it is equally important to understand the steps that you need to take when you encounter the inevitable aggression from your Flowerhorn.

Why Are Flowerhorn Aggressive?

Flowerhorn is a member of the Cichlid family and the first thing to realize is that Cichlids are by their nature aggressive fish to a certain degree. Many strains of the most beautiful Flowerhorn have the bloodlines of the more aggressive Cichlid strains such as Red Devil Cichlids, Midas Cichlids, and Green Texas Cichlids. While they are all outstanding examples of the breed, they are all known as extremely aggressive varieties of fish. Having said that, they do form the base lineage for all of the different hybrids of Flowerhorn. It is this lineage that provides the dazzling specimens available today. However, due to the intermingling of all the new and different strains increased caused by cross breeding and further hybridization, higher levels of aggression can result. Unfortunately, there is no way to really trace what strains are in each Flowerhorn because of this.

Do different strains have more or less aggression?

It is necessary to remember that all strains of Flowerhorn fish show aggression. The only time there seem to be lower levels of aggression in any Flowerhorn strain is possible because fish are immature and smaller in size. However, as these fish mature they will become more insistent on showing dominance and both establishing and protecting their territory.  There are no “gentle” strains of Flowerhorn and the only variants in aggression in Flowerhorn fish may occasionally be between the sexes of the fish.

How Aggressive are Male Flowerhorn?

Is there Aggression between Male and Female Flowerhorn?

A male and female Flowerhorn fish may be kept indefinitely in the same tank.  It is imperative that you ensure the tank is large enough for both.  It is also very important that there are enough hiding spaces provided for the weaker or more docile of the two. Male and female flower horn can even be aggressive toward each other during the spawn. The two parents can even become heated over protecting the eggs or fry and cause damage to one another.

Is there Aggression toward Flowerhorn Fry?

Flowerhorn fish do make exemplary parents and protectors of their unhatched eggs and their young fry. However, sometimes problems can occur. Flowerhorn chasing and eating their own young out of pent up aggression or frustration is not unheard of. Ensure proper feeding of all stock if the male, female, and fry are to be kept together initially in one tank. Flowererhorn has a voracious appetite under any circumstances and if adequate amounts of food are not provided for every fish in the tank as needed, it can endanger the fry.

Do Flowerhorn show Aggression with its tank-mates?

You will find that there are very few fish who will be able to withstand the aggression of the Flowerhorn. However, several people have had very good success with different varieties of Plecos and other bottom-dwelling fish. Notably, these fish may be more compatible with the Flowerhorn due to their placid and non- threatening natures. Other small and swift fish may also share a Flowerhorn tank, but must be watched closely.

Will Flowerhorn show aggression towards humans?

Many Flowerhorn has been known to chase and bite at the hands and fingers of their keepers. Because your Flowerhorn will see your fingers, hands, or tools as something invading their territory, the attacks can be very sudden and extremely painful. Some hobbyists have had success at training their Flowerhorn to allow contact or handling, but not everyone is successful at being able to do so. Food is usually the motivator in these cases and can be used as a reward when the Flowerhorn display proper behavior.

What can trigger Aggression in Flowerhorn Fish?

A Flowerhorn can display aggression for no obvious reason at all, but it is known that anything that seems to try to assert dominance over a Flowerhorn will cause an aggressive attack.  Other triggers for aggression in the Flowerhorn are spawning or protecting the eggs or fry from a spawn.  A poorly maintained tank can contribute to your Flowerhorn being uncomfortable and on edge. Keep your Flowerhorn fed with adequate amounts and a variety of food to keep them happy and comfortable.

What are the warning signs of Aggression in Flowerhorn Fish?

Impending aggression is easy to spot in the Flowerhorn. It seems that nearly anything will set them off.  The first sign of a feisty Flowerhorn will be the flaring gills. From there you will be able to observe darting and charging behavior. The Flowerhorn will launch itself at other fish, any part of you (inside or outside of the tank), and sometimes its own reflection.  It is not unheard of for a Flowerhorn to attack the sides of its own tank.

How can I reduce Flowerhorn Aggression?

The best method for reducing Flowerhorn is to keep them alone in a large tank.  If you don’t like this idea, there are some others to practice.  Giving your other fish in the tank lots of places to hide is wonderful.  Rocks and other sturdy aqua-scaping employing the method of  “line of sight” works very well. The theory is out of sight, out of mind.  This protects your other stock from harm. If the Flowerhorn can’t readily see its tank mates, there will less aggression. Setting up your large tank with lots of areas for different boundaries is a good solution as well.

The natural aggression the Flowerhorn fish displays may seem daunting.  It is very true that keeping these varieties of fish are not for the faint of heart.  For these reasons, they are not for the hobbyist that wants a fish that requires little due diligence. The rewards for having one of these beautiful fish to grace your tank are immeasurable. Their unique looks and interesting personalities definitely make them worth the effort.