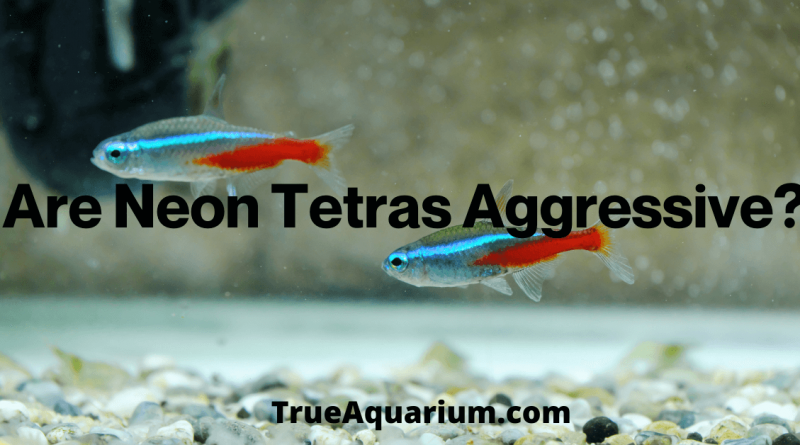 Neon tetras are great socializers and very peaceful fish says aquarists all over the world. Many believe that if these fish are not in groups or schools, they might fall sick or die. This is usually true. However, further study of Neon tetras shows they can become aggressive when kept together in groups without meeting the required conditions.

Neon tetras usually fight if there isn’t enough space to swim. Focus on the tank size and make sure you don’t stock rival fish that are not compatible with them. Otherwise, this might trigger aggressive and violent behavior among your fish. In Addition, try to keep the neon tetras fresh at all times by ensuring the optimal water temperature.

Let’s focus on neon tetras. Are they aggressive? How and what could make them so?

Neon Tetras rarely become aggressive and are peaceful by nature. However, when they start showing signs of bizarre behavior, you need to check the tank. If the tank is too small for them, it might be causing them stress. On the other hand, they might be infected with neon tetra disease, which will cause them much more stress.

So, are neon tetras aggressive? No, they are not. However, they tend to turn aggressive when they feel stressed. Like any other aquatic animals, they show aggression when they are under some sort of stress like bullying or improper tank condition.

To sum up, as prior mentioned, Neon Tetras are not aggressive by nature, but the circumstances can trigger them.

What Are Neon Tetras?

The neon tetra (Paracheirodon innesi) is a small South American freshwater fish. It is common among fish keepers due to its vibrant colors and ease of care. It’s a perfect beginner fish because of its relaxed demeanor and precise dietary requirements.

Continue reading this article to discover more about neon tetras. I’m sure you’ll fall in love with neon tetras and their setting.

Let’s look at some Neon tetra characteristics and why they aren’t violent.

Do Neon Tetras Attack Other Fish?

Neon tetras may chase other fish without being aggressive or threatening them. They are really playful fish, and this can put off beginners who have never had neon tetras. You don’t have to be concerned about this issue until it becomes severe. Neon tetra may begin nipping the fins of other fish when stressed, so you need to ensure they are not under any stress.

Furthermore, older fish will chase down and fin nip new fishes in the tank. When most fish are nervous or annoyed, they can nip the fin of a rival fish, but this behavior is more common among neon tetras.

This is an important question. Neon tetras enjoy swimming in groups, so there is no way you can isolate a neon tetra from its fellow friends. Check source

Does this, however, suggest that they never attack each other?

It occurs from time to time. If a new tetra is introduced to older ones, the older ones may bully it, and it may be removed from the party for some time.

So, as time passes, the entire school of tetras will become accustomed to each other and get along; maybe they need some time to adapt.

If two males compete for one female, they may become aggressive and harass one another to win a female.

If you see your neon tetras behaving oddly in contrast to their everyday actions, you should be alarmed. They are probably in grave danger.

While living in peace, Tetras may have violent outbursts against one another for reasons we don’t completely understand. As a consequence, if one of your tetras begins to lose color as a result of other tetras abusing it, the only alternative I suggest is isolating this bullied tetra from the rest of the tetras, as more bullying may kill it

How To Curb Neon Tetra Aggression?

If you see your neon tetras behaving oddly in contrast to their regular actions, you should be aware that they are in grave danger.

As previously mentioned, neon tetras are friendly creatures by nature and rarely become violent. So, if they start behaving oddly, check your tank. It could be causing them discomfort. If the water is too cloudy or the temperature has abruptly changed, the tetras can become disturbed and turn violent.

Also, if they are not fed properly and are hungry according to their schedule, they can become frustrated. Check the lighting too if it is not too bright for them as this may also cause them stress. If your neon tetras continue to be aggressive even after you did all of that, then there must be something wrong. You may need to consider getting them tested for an infection that might be stressing them. Ensure you watch over your tetras frequently.

How To Take Care Of Neon Tetras?

Many cousins of neon tetras are simpler in nature than they are. In fully planted aquariums, neon tetras flourish in acidic warm water.

If the circumstances under which they feel at ease change, they will become more violent, and their responsive nature will begin to shift. It’ll likely destroy them as well.

Bear in mind that they tend to be in groups. Even if you believe that as their numbers grow, they will become more aggressive, this is not the case. The greater their numbers, the more at ease they become and the lower their risk of aggression. They are naturally peaceful, which makes them great fish tank companions.

As a result, they should never be kept in a tank with larger or more aggressive fish. Also, choose their food correctly because bigger pieces could jeopardize their lives.

Neon tetras, as previously mentioned, are delicate fish. They eat two or three times a day. Don’t overfeed them because this will cause them to become violent. Blood worms, daphnia, and brine shrimp, as well as crushed flakes, are among their favorite foods.

Often keep an eye on the water’s parameters and ammonia levels. Ensure you keep the tank clean regularly and filter the water as needed. People also believe that neon tetras are an excellent choice for beginners. Still, they need special care and attention, so only a more experienced pet fish owner will know how to treat them.

Note that they need dim lighting to feel safe and relaxed. Every fish species has its own set of requirements to function well

Although fun, having a pet fish requires a tolerant, patient, and caring owner who educates himself/herself about keeping them correctly all the time.

Being A Peaceful Creature By Nature, Why Does Neon Tetra Acts Aggressively Sometimes?

Neon Tetras will show signs of aggression while they mate or feed. Of course, these situations can trigger the aggressive side of these fish. Another thing that can make these fish aggressive is a small tank size with more tetras than it can contain.

Also, it is in their nature to defend their territories. However, this may also be because they are in grave danger. You should adequately feed them and determine whether they have contracted a disease, determine the amount of ammonia, and check the water parameter. By keeping track of all these things, you limit their risk of aggression and save their lives.

What Happens When Tetras Fight? Do They Get Injured Or They Die?

Whenever fishes fight, the smaller ones usually get injured. Their fins get nipped, which may cause them to barely swim and die. In the same way, the one tetra that has been attacked and bullied gets stressed, and it’s only a matter of time before it dies.

The probability of this happening is high! One aggressive tetra that goes on attacking the other tetras could cause them stress. They would either attack back or lose control and hurt one another.

Definitely, because Neon tetras love to be kept in groups, so if a single tetra is in a fish tank filled with other species, it would be stressed out. This could result in aggressiveness. However, most times, it would shy away. In such a case, get the poor fish 4 or 6 more neon tetras to get along. Tetras love each other’s company.

Are Tetras of Different Species?

Neon Tetras can be aggressive but most times they are very peaceful. So many aquarium enthusiasts keep these fish due to their calm and hardy nature.

Still, under some unmatched conditions like the tankmates around, the quantity of fish in the school, the size of the tank, etc., they become slightly more highly aggressive. So, as a fish keeper, it is your responsibility to fulfill these conditions and choose proper tank mates for them.