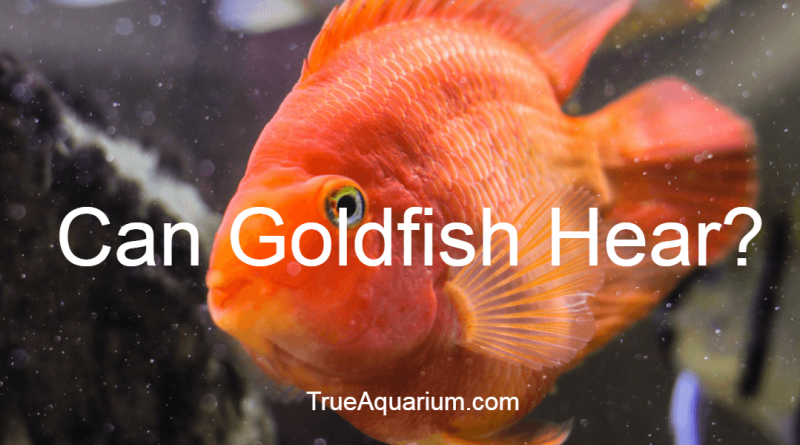 You must have seen your goldfish respond to tapping on the aquarium glass, but can goldfish really hear? Well, you are not alone asking this question. Most goldfish owners wish they knew the right answer.

So can goldfish hear? First of all, know that goldfish do not have external ears as we humans do. However, they can still hear a sound, thanks to their internal ear. Not only can they hear, but they can also differentiate between sounds.

How do goldfish hear any sounds?

Even though goldfish do not have visible ears, they can hear and interpret sound because of two reasons. First of all, know that goldfish can hear sound through the inner ear present inside their head. In fact, the inner ear comprises of small bones that move when they come in contact with any sound waves or vibrations in the water. Eventually, the movement of the bones in the inner ear displaces the sensory cells, and this is what the fish interprets as sound. Secondly, goldfish have lateral lines along their body. So these lateral lines help them detect vibrations or movement in the water. In fact, water acts as a medium for the sound waves to travel, while the sensory cells along the body of the fish make it possible for them to interpret and understand sound.

Can goldfish tell where the sound is coming from?

Goldfish can not only hear music but also differentiate between musical genres. Recently, a team of Japanese scientists conducted a study on goldfish to see if they can hear music. As part of the study, the scientists divided the goldfish into two groups. They trained the first group of goldfish to bite a food-filled ball while Bach’s music was playing. The second group, on the other hand, was trained to associate food with Stravinsky’s music.

After the fish were trained, they were put back together. The scientists then played the two pieces of music again to see which fish would bite on the bead for food. Interestingly, they found that the goldfish from the first group would only look for food when Bach would be played. On the other hand, the second group would only bite food when Stravinsky would be played. Hence, the scientists concluded that goldfish have the ability to differentiate between music.

Do goldfish and humans have the same hearing rage?

Can goldfish talk to each other?

Typically, goldfish communicate with each other through body language but they do not have the ability to talk to each other.

According to Ghazali, goldfish have excellent hearing abilities, but they do not produce any sound whatsoever. Hence, goldfish cannot talk to each other.

Why should you stop tapping on the glass of your aquarium?

Now that you know that goldfish can hear, you may want to tap on your goldfish tank to cheer up your aquatic pet. Unfortunately, that’s a bad idea. In fact, tapping on the side of your aquarium can scare your fish to the core. At times, you can get excited and tap the glass bowl a little harder than you should. So those strong taps would make the water vibrate harder and could startle your fish. Typically, goldfish are very responsive to any vibrations in the water. The stronger the vibrations, the more stressful they feel. In fact, a goldfish in an aquarium is more sensitive to sound than a goldfish in a pond. Clearly, an enclosed aquarium bounces off the vibrations or sound waves from multiple sides of the tank, making it more stressful for the goldfish.

Can goldfish hear the filter?

Yes, goldfish can hear the sound produced by the water filter or water heater used in an aquarium. Typically, a water filter or heater comes with a motor fitted inside them. So when they are plugged in, the motors vibrate and produce sound. When you purchase these heaters or filters, make sure that you purchase the ones that do not produce much sound. In general, normal tank noise should not scare your goldfish. However, if the filter or heater generates excessive sound, it could make your fishy pet feel stressed and can even affect its health. So, choosing the right filter for your goldfish tank is critical to the well being of your aquatic friend.

Can goldfish recognize their owners?

Yes, goldfish can recognize their owners very well. Even though they are not as smart as other pets like a dog or a cat, goldfish are smart enough to recognize their owner. You must have noticed that your goldfish swims to the top whenever you come near the tank. Evidently, this is because over a period of time they get used to seeing you. Otherwise, if you often serve them food, they can easily associate you with feeding. So every time you come near the bowl or tank, they float to the surface to greet you. In fact, a recent study by researchers at Oxford University found that goldfish may have the ability to recognize a familiar human face out of more than 40 human faces.

Do goldfish have a sixth sense?

First of all, let’s understand what exactly a sixth sense means for the goldfish. Typically, we equate sixth sense with a power of perception. However, the sixth sense of a fish is often associated with its ability to perceive a danger through hearing rather than through vision or touch. For instance, your goldfish may respond to sounds even in a dark room. In fact, goldfish have neuromasts or a cluster of sensory cells along their body. Remember we talked about the lateral lines along the body of a goldfish? The same lines help goldfish to sense any minute changes in water pressure or vibrations. As a result, they can sense detect a predator well in advance. That is exactly why some people say that goldfish have a sixth sense.

Do goldfish have feelings?

Yes, the answer is a big yes. Your goldfish does feel certain emotions, such as loneliness, jealousy, love and happiness. Hence, experts always advise that you should get a pair of goldfish rather than just one. In fact, living alone can make a goldfish ill and short-lived. Just like humans and other animals, goldfish feel the need to socialize. Also, you can see your goldfish to get extremely aggressive especially during the mating season. In fact, studies show that male goldfish can actually eat their own eggs during the mating season. So once the eggs have been laid, it is better to separate the pair for a while.

Of course, goldfish can sleep, although they do not sleep like other pets or animals. In fact, sleep is very important for goldfish to restore their energy levels. Also, it helps them to stay healthy and fight off diseases. Restoring energy levels is also important to allow the fish to fight their enemies.

How to know if your goldfish are healthy