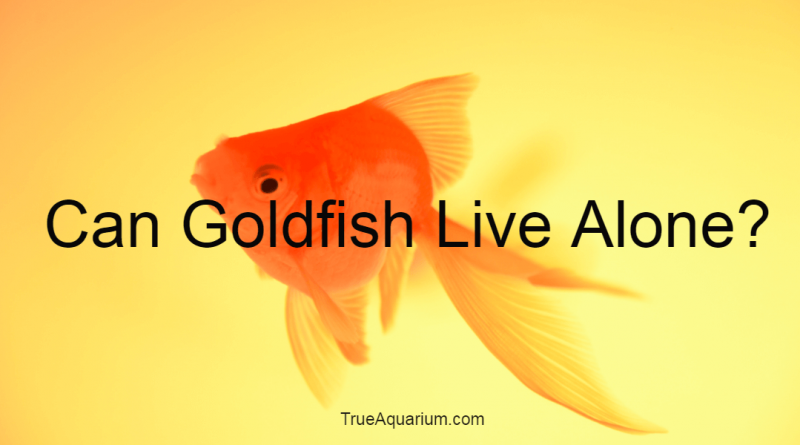 You must have seen two or more goldfish playing with each other in an aquarium. After all, it’s a wonderful sight to behold. However, this may lead you to think that goldfish are social creatures. But is that true? If you leave them alone in your tank for a long time, could they get depressed? Can goldfish really live alone? Do they need to be in pairs? Let’s find out.

Can Goldfish Live Alone? Apparently, a goldfish can live alone just fine. However, if you dig deeper into the subject, you’d know that goldfish tend to look happier when they live in a group. So, can goldfish live alone? Yes, they can. But should you keep them alone? Well, you probably should not do that.

Unfortunately, you cannot ask your goldfish to express how they feel. However, researchers had done a great job observing fish behaviors over the years, which led us to come to certain conclusions on the topic. In this article, we’ll touch upon some of the key findings and answer all your questions related to the social needs of a goldfish.

In the wild, goldfish typically swim and forage for food as a group. In fact, you’ll often see them swim together in the same direction inside an aquarium. This shows that goldfish are social creatures. In fact, goldfish exhibit both shoaling and schooling behaviors. That way, they stay together and protect themselves against predators in the wild. Also, goldfish are great at emulating habits of other fish. For instance, seeing one goldfish swim close to the aquarium glass could encourage others to do the same. Suffice to say, goldfish are social creatures with strong social learning skills.

Can goldfish get lonely?

First things first, know that goldfish have the ability to live alone. However, just because goldfish can live alone doesn’t mean they cannot get lonely. It’s one thing to live; it’s another to live happily. Goldfish typically love playing with a friend or partner in the tank. Remember, however, that the social needs of a goldfish are different from those of a human being. Your goldfish probably don’t crave companionship the same way as you do. That said, it is also true that goldfish enjoy the company of other fish. So, when they don’t get to live with other fish around them, they may feel alone or unhappy.

Can goldfish get depressed?

It is difficult to tell if a goldfish can get depressed as we humans do.  However, recent studies show that fish depression is no joke. In fact, a study conducted by researchers at Troy University, Alabama shows that a depressed aquarium fish is more likely to swim close to the surface of the tank. So, if you notice your goldfish hovering around at the top of your tank water, it is probably spending a good time. However, if your goldfish often swims at the bottom, maybe it is a sign of depression.

Do your goldfish need a partner?

Experts are divided on whether a goldfish can get lonely. However, you don’t have to be an expert to know that goldfish love the company of other fish. In the wild, they swim in shoals. Likewise, you can see them interacting with their tank mates in an aquarium. So, do your goldfish need a partner? Well, it is always a good idea to pair up your goldfish with at least one tank mate. In fact, it is illegal to keep a goldfish alone in Switzerland. Also, animal welfare organizations like The Royal Society for the Prevention of Cruelty to Animals (RSPCA) recommend that you should keep at least two goldfish in your tank.

What tank mates are unsafe for your goldfish?

What are the risks of putting a new fish to my goldfish tank?

What tank mates are best for your goldfish?

What tank conditions to consider for adding a new fish to your goldfish tank?

First of all, your goldfish tank should have enough space to accommodate any new tank mates. Ideally, you should use a big aquarium with lots of plants and stuff versus a small goldfish bowl. The water temperature should be between 65 and 80 degrees Fahrenheit. Also, goldfish typically sleep at night. So, it is always a good idea to turn off the aquarium lights at night. When adding a new fish to your goldfish aquarium, consider if the new fish can survive in similar living conditions. Finally, make sure you provide enough food for everyone in the tank, so they don’t end up fighting for food.

Can I introduce multiple new fish to my goldfish tank at once?

No, you should not do that. In fact, you should add one fish at a time. In fact, the gap between adding one fish and another should be at least one month. Remember, some goldfish may exhibit territorial behavior and attack any newly introduced fish in the beginning. So, wait and watch how your existing goldfish interact with the new fish before you add another fish to the tank. As already mentioned, you should also consider the tank size before adding any new fish to the aquarium. Ideally, your goldfish tank should have at least 20 gallons of water per fish.

Can I introduce Plecostomus to my goldfish tank?

Plecostomus, also known as Plecos are a type of catfish. Thanks to their specially adapted suckermouth, they often cling to hard surfaces and substrates in an aquarium tank. Typically, Plecos are peaceful and can get along well with any aquarium fish. Also, you will find them in a wide variety of colors and patterns. Plus, they are low-maintenance pets. However, Plecos can try to eat the scales of your goldfish and thus make your pet more susceptible to injury and infections. Also, some Plecos can grow larger than your goldfish, resulting in a lack of space in the goldfish tank. That being said, certain species of Plecos such as Bristlenose Plecos can make good tank mates with goldfish as they usually don’t suck on the goldfish scales.

Can goldfish live alone in a bowl?

Yes, your goldfish can live alone in a bowl. However, keeping your goldfish in a bowl will probably shorten its lifespan. Typically, goldfish produce a lot of waste, which could pollute the water fast if you keep them in a small bowl. So, it is always a good idea to keep your goldfish in a large aquarium equipped with a filter. Otherwise, the toxic elements in the fish waste can quickly poison the bowl water and cause serious health hazards for your fishy pet.

Is it necessary to add a filter to my goldfish tank?

Yes, it is very important to make sure that your goldfish tank has a proper filter to clean the water. In fact, a tank without a filter could make life difficult for your fishy pet. There are mainly two ways a goldfish can inhale air or oxygen. So, goldfish can either take in air directly from the water or swim upwards to the surface of the tank to inhale air by their mouth. So, as you can imagine the second method is not very convenient for the goldfish. Hence, they usually want to use the first method. However, if your aquarium does not have a filter, it could be difficult for your goldfish to take in oxygen directly from the water. So, that is exactly why you should equip your goldfish tank with a filter.