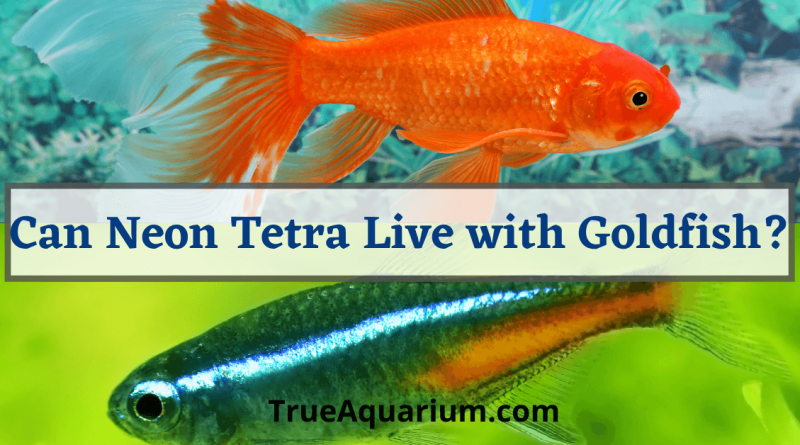 Both fish are colorful species of fish that would grace your fish tank. But then, you wonder if it is okay for you to have them as tank mates just for their colors. Well, that is valid but can neon tetra live with goldfish?

The answer is No! Neon tetras and goldfish are opposite fish in so many ways. For instance, neon tetras thrive in warm temperatures while goldfish thrive in cooler temperatures. Aquarists choose neon tetras are largely for their vibrancy and nice colors. Similarly, goldfish have a nice appearance in your fish tank but won’t stay with neon tetras.

Owning fish tanks requires some level of intelligence about the fish you want in your fish tank and their best tank mates. Neon tetras and goldfish are opposite fish and the mistake of putting both together would only cause harm and loss for the tank owner.

You feel sad that you can’t have these pretty fish in your tank together? Well, maybe when you read this, you’d get to know why you shouldn’t keep them together.

Asides from the fact that these fish need different water conditions to survive, goldfish produce a great deal of waste which would affect the very-sensitive neon tetra. The neon tetra in return could transmit diseases to the goldfish.

A grown goldfish could as well eat up all your neon tetra; it’s just fish’ tradition to likely eat any other fish that can go through their mouth.

Putting a school of neon tetra and troubling of goldfish together is just going to be disastrous. Now, you know why both fish can’t live together.

As well, their social habits are way different; neon tetras are usually in groups (school) while goldfish don’t swim in a group, they migrate toward other goldfish. “Troubling” is what you call a group of goldfish.

Is there a Common Water Condition for Your Neon Tetras and Goldfish?

The two different fish species may not find water condition suitable for them to live together. They are both sensitive and responds slight change from the normal temperature.

As you can see the average temperature requirements of both fish are wide apart. So, trying to keep them together would only be a futile attempt.

These colorful species of fish would only die if you don’t take very good care of them, first step is to put them in the right water condition.

Is There a Tetra Species that Can Live with Goldfish?

It is for certain reasons that these tetras can live in the same fish tank with goldfish; black skirt tetras and bloodfin tetras are fast so they can outrun the goldfish that wants to eat them.

Bloodfin tetras are perfect for beginner aquarium owners, same as the black skirt tetra; they get too big for the goldfish to eat.

Therefore, if you need to have a tetra fish in your goldfish tank, you can go for a black skirt tetra or bloodfin tetra. These species can adapt growing up with goldfish in the same aquarium.

Although, we still do not advice to have these tetra species with goldfish. The tank condition requirements are not exactly the same.

It is not advisable that you put your neon tetra and goldfish together for reasons you should know by now but then if you’re just curious if your neon tetra can eat goldfish food, well, feel free to read on.

Neon tetras are not so selective with their food; so, yes, they can eat goldfish food (flakes). You have to watch them when you first feed it to them to make sure they can eat all the pellets and make sure it doesn’t become their regular diet.

Other things on the menu of omnivores neon tetras are live or frozen brine shrimp, frozen or freeze-dried bloodworms.

On the contrary, it is the goldfish that is selective and cannot eat food that is not meant for them. Goldfish do not have an actual stomach, so digestion is a herculean task for them. What they eat are goldfish flakes or pellets. See Goldfish section

Which Colorful Fish Can Neon Tetras Live With?

Guppies! This is a very vibrant fish that matches with Neon Tetras. They portray the same kind of energy.

The first thing you would notice about neon tetras and guppies is their vibrancy, the reason why every fish tank owner wants to have them in their fish tanks. Both are a perfect match.

They are both peaceful fish; both are best kept in schools as isolation causes them to feel threatened, get sick, or not swim freely.

Their diet is similar as well as their preferable water condition since both are tropical fish found in the Amazon.

The beauty they bring to your fish tank is top-notch too, with neon tetras and guppies swimming in groups and often male chasing the female trying to impress especially when it is mating period. It is always a beauty to watch.

Unlike goldfish that produce a great deal of waste, neon tetras and guppies are water-sensitive and would thrive better in clean waters. If for nothing, get these fish in your fish tank for the aesthetic.

Guppies are not the only fish that can live with Neon Tetras but they effortlessly blend in.

In the end, we got to know that neon tetras cannot live with goldfish due to various reasons like goldfish producing lots of dirt that could get your neon tetra sick and goldfish bully and eventually eating up your neon tetra.

Anyways, there are species of tetra that can live with goldfish – bloodfin tetra and black skirt tetra; put up with their size and bullying as they grow. Also, their speed is an advantage that helps them out-swim goldfish.