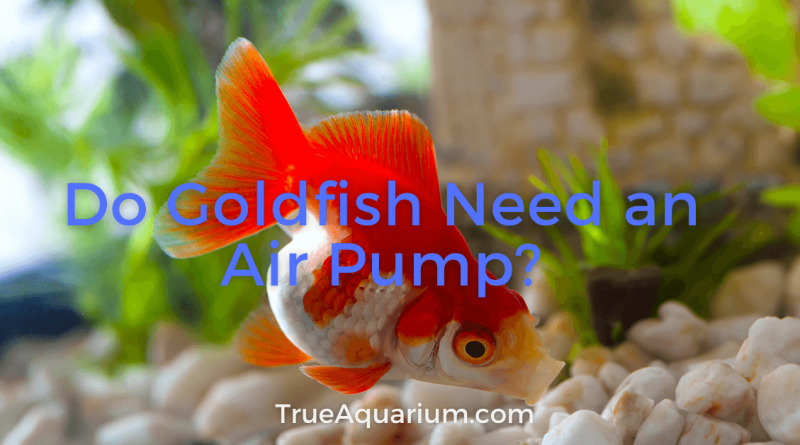 Most goldfish owners would happily invest in an air pump, if only to create bubbles inside their tank water. Undoubtedly, air bubbles are a wonderful sight to behold! But do goldfish actually need them? Often, experts say that tanks fitted with a filtration system do not need an air pump.

At this point, you may have several other questions related to the topic. For instance, how will you know if your goldfish need more oxygen? When is it absolutely necessary to use an air pump? Also, what if you do not want to use an air pump? Hopefully, this article will resolve most of your queries.

How do goldfish get their oxygen?

It’s true that goldfish don’t have lungs but they still breathe. In fact, goldfish breathe with their gills. Typically, the fish would gulp water through its mouth. Next, the water would pass through the fish’s gills. At this point, the filaments in the gill would soak up oxygen from the water. After that, the oxygen would enter the fish’s bloodstream and circulate throughout the body. Meanwhile, the gills would force out the water with the waste carbon dioxide.

What are some signs your goldfish not getting enough oxygen to breathe?

Ideally, goldfish should get enough oxygen from the tank water. However, sometimes you may notice your fish rising to the surface and gulping air. Of course, this is a sign that your tank water lacks oxygen. Similarly, there are many other signs to watch out for. For instance, look for any faster than normal gill movements. In other words, heavy breathing is a sign your fish needs more oxygen. Likewise, another sign is decreased activity. Often, your fish will become inactive when the water is not properly oxygenated.

How does an air pump work?

What are some of the top reasons you should use an air pump?

First of all, an air pump helps create surface movement in the tank water. That way, it streamlines the oxygen exchange process that occurs at the surface where the water meets the air. Secondly, the bubbles help add oxygen directly to the water. Thirdly, an air pump helps circulate the water inside your tank. As a result, the water at the bottom your tank (that otherwise sit still) will move and get oxygenated. Finally, you can use an air pump to enhance the visual aesthetics of your aquarium. Of course, the stream of bubbles will make your fish tank look more stunning.

Can goldfish live without an air pump?

Do goldfish need a filter or an air pump?

That’s not to say, however, an air pump doesn’t serve any functional purposes. In fact, the bubbles from an air pump also help create surface disturbance. That way, it helps ramp up the speed of oxygen/carbon dioxide exchange at the surface where the water meets the air. However, your filtration system can do the same in addition to filtering your water. Suffice to say, you should prioritize a filter over an air pump, in most cases.

Do goldfish need an air pump in addition to a filter?

In some cases, goldfish tank may need an air pump in addition to a filter. For instance, if you notice inadequate surface movements in your tank water despite using a filter, consider investing in an air pump. Also, it is necessary to use an air pump when the water temperature is high. In addition, an air pump is essential for tanks with a small surface area.

What temperature is right for your goldfish tank water?

Ideally, you should keep the water temperature anywhere between 68 and 74 degrees Fahrenheit. As the temperature increases, the oxygen level starts to decrease. As a result, your goldfish could get sick or inactive. So, it is always a good idea to add an air pump to your aquarium during the summer months. Similarly, consider using a heater during the winter season.

Can your goldfish tank have too much circulation of air bubbles?

Rarely, your goldfish tank may have too much circulation or surface movement. For instance, you may notice your fish struggling to swim around due to high flow of air bubbles. Also, some species of goldfish are slow swimmers. In such cases, you should adjust the flow your air pump accordingly.

Can goldfish live in a fish bowl without an air pump?

Typically, tanks with a low surface area lack oxygen. That’s because the oxygen exchange occurs at the surface of your tank water. So, the larger the surface area, the more oxygen will enter your tank water. Evidently, a goldfish bowl has a low surface area, resulting in oxygen exchange at the surface. Furthermore, the feces and waste materials accumulate faster in a small bowl. This reduces the water movements even more. So, ideally you should use an air pump in your fish bowl. However, fixing an air pump in your fish bowl may not always be feasible. Alternately, consider changing the bowl water every day. Even better, invest in a large tank for your goldfish. That way, you can easily use an air pump in your goldfish aquarium.

Should you turn your air pump off at night?

What if you cannot install an air pump?

Sometimes, you may not have enough space in your tank for installing an air pump. Or perhaps, you don’t want to install an air pump. In any case, you can still aerate your aquarium without having to using an air pump.

What is the difference between aeration and oxygenation?

First of all, let’s not confuse aeration with oxygenation. Simply put, oxygenation is the process of adding oxygen to the tank water. In comparison, aeration helps oxygenate water by creating a flow or movement within in the water tank.

Can you aerate water without using an air pump?

Of course, you can aerate water without using an air pump. There are a few ways to do that. First of all, let’s talk about the cup method. Firstly, take a cup of water from the aquarium. Next, lift the cup high from the surface of the water. Finally, pour the water from the cup back into the aquarium. Evidently, the cup water will collect fresh oxygen from the air as it would travel its way down to the tank. Alternatively, you can use a premium quality filter capable of creating a strong water flow. In addition, you can consider using live plants in the aquarium. Eventually, the plants will consume carbon dioxide and release oxygen. Finally, consider investing in a large size tank with a high surface area.

How do you test the oxygen levels of water?

You can use a portable, dissolved oxygen meter for measuring the oxygen level. Typically, the meter will show the results either as percentage of dissolved oxygen or milligrams of oxygen in the tank.

How to choose the right air pump for your goldfish aquarium

First of all, consider the size of your tank. As a thumb rule, choose a pump that blows a minimum of 0.033 liters of air to one gallon of water every minute. For instance, a 60-gallon aquarium needs an air pump capable of releasing 1.98 liters/minute. Also, consider that a high water temperature can lower the amount of oxygen in the water. Likewise, a low water temperature will make the amount of oxygen go higher.