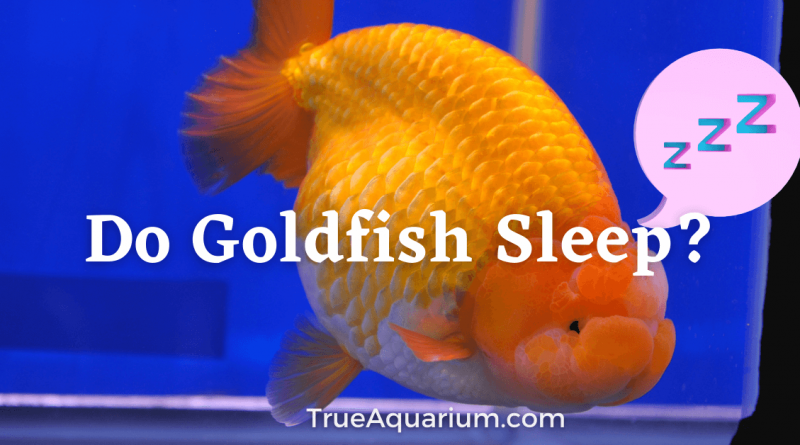 You have never seen your goldfish close their eyes or lie down at the bottom of the tank. So, does that mean they never sleep? If so, then how do goldfish refresh or rejuvenate? In fact, sleep habits of goldfish are often a major talking point among pet parents.

So, do goldfish sleep? Interestingly, goldfish do not have eyelids but they still sleep. In fact, goldfish mostly sleep at night as we humans do. However, unlike humans, goldfish sleep with their eyes open and don’t lie down for slumber. Instead, they would become less active and float in just one spot to catch their zzz’s.

When do goldfish sleep?

Interestingly, goldfish are either diurnal or nocturnal. So, not all fish in your aquarium would naturally sleep at the same time. In fact, some fish may want to sleep at night while others would prefer a daytime nap. However, the sleep schedule of your goldfish depends mostly on environmental conditions. Typically, goldfish need a calm and dark environment to sleep. Hence, if you can control the sounds and lights in your goldfish tank, you can make your fish sleep anytime you want. Ideally, you should train them to sleep at night. That way, keeping the surroundings quiet isn’t a problem. So, all you now need is to turn off the aquarium lights, preferably at a fixed time every night. Remember, your goldfish needs 12 hours of darkness and calmness every day.

Typically, sleeping goldfish are almost immobile and inactive. Often, you’ll see them hovering around at a fixed spot with their head tilted downwards. In addition, you can also notice a considerable decrease in their fin movements. Often, when goldfish sleep, they look less bright. That way, they can hide them away from predators in the wild. So, this fade in colors is actually a survival mechanism for goldfish. However, goldfish do not close their eyes when they sleep. That’s because they don’t have eyelids! Ironically, a goldfish has its shuteye with the eyes wide open.

Where do goldfish sleep?

Often, you’ll find a sleeping goldfish close to the bottom of your aquarium. Typically, your fishy pet would hover around one or two inches off the bottom when they are asleep. Importantly, do not forget to switch off the tank lights when they’re asleep. In fact, any sudden sounds or lights could startle the sleeping fish.

How to know if your goldfish is sick or simply sleeping

First of all, know that a sleeping fish will never sit at the bottom of the tank or float upside down. In fact, it will also not lean sideways. So, if you notice any of those signs, your fish is probably sick. Often, people don’t understand this but just because your goldfish is inactive doesn’t mean it is sleeping. For instance, a goldfish with a bacterial infection would often lie on the side. Likewise, floating upside down or sideways is often a sign of swim bladder disease. To clarify, swim bladder disorder occurs when the fish’s internal air-filled organ gets compressed. As a result, the fish would have difficulty staying buoyant. In fact, your fish can experience swim bladder problems due to overeating, constipation or bacterial infections. Often, the problem stems from water quality issues, such as high ammonia levels. So, test the water and conduct water changes frequently.

How long do goldfish sleep?

First of all, know that not all goldfish need the same amount of sleep. In fact, their sleep requirement varies across species and depends on multiple factors. For instance, some goldfish sleep all through the night while others are happy with an afternoon slumber. However, goldfish need to stay in the dark for around 12 hours every day. That way, they could at least sleep at night if they’d like to.

What if your goldfish are not sleeping enough or sleeping too much?

In either case, find out the root cause of the problem and fix it. Obviously, sleep is important for your goldfish. So, if your goldfish is not sleeping enough, it could slow their metabolism. As a result, your goldfish could suffer from constipation or abdominal bloating. Also, a sleep-deprived fish tends to eat more and invite health problems from overeating. In addition, a lack of sleep often weakens their immune system. On the flip side, too much sleep could hamper growth and development of your fish

Is yawning a sign that your goldfish is feeling sleepy?

Actually, No! Unlike humans, goldfish do not yawn when they feel sleepy. Instead, they would simply start sleeping. In fact, a goldfish yawns when it needs to clear its gills with water. Usually, goldfish breathe in water to allow the gill to take up oxygen. Often, the fish would also yawn to reverse the water-intake mechanism and clear the gill in the process. So, yawning has nothing to do with feeling sleepy.

Do goldfish enter the stage of deep sleep?

Typically, we humans experience four stages of sleep. In comparison, goldfish experience only two stages of sleep. Suffice to say, goldfish usually experience light sleep but do not enter into a deep sleep. So, deep sleep generally starts from the third phase and continues until the rapid eye movement (REM) phase. At this stage, humans create memories and heal their bodies and mind. However, studies show that a goldfish’s brainwaves do not change when they sleep. Clearly, goldfish do not enter the stage of deep sleep like we humans do.

Why do people often mistake a dead goldfish for a sleeping one?

Typically, goldfish live for over 10 years. However, not all goldfish die a natural death. For instance, some may die at a younger age from illness or ammonia poisoning. Often, pet owners would mistake a dead goldfish for a sleeping fish. For instance, you might see a goldfish floating at the top of the tank water and assume that it is sleeping. Likewise, you could see a dead goldfish lying at the bottom of your tank and mistake it for a sleeping fish. So, it is important for you to take a closer look at your fish to see if it is actually sleeping or dead. In fact, a dead fish can contaminate the tank water and pose health risks for the other fish in your tank. So, it is important to identify and remove any dead fish as soon as possible.

How to identify a dead goldfish from a sleeping goldfish?

Thankfully, there are ways to tell if your goldfish is sleeping or dead. First of all, watch your goldfish closely for any signs of breathing. For instance, if you notice their gills are not moving, the fish are probably dead. Secondly, look for any intermittent fin movements. Thirdly, use your aquarium net to scare the fish. If the fish doesn’t react to touch, it is probably dead. Finally, check the fish’s eyes. More specifically, if the eyes look cloudy or sunken, it’s a sign that your fish has probably deceased. So, once you identify a dead goldfish, you should take immediate steps to dispose of it. First things first, remove the dead fish from your aquarium. Next, consider changing the tank water to get rid of any contaminants. As an aside, never flush the dead fish down the toilet as it could poison your entire water system.

Why your goldfish is oversleeping?

Clearly, it is not normal for your goldfish to sleep most of the time throughout the day. In fact, oversleeping is a sign that something is wrong with your fish or your tank environment. For instance, your fish is probably feeling sick from high tank water temperature. Ideally, you should keep your aquarium water temperature below 72 degrees Fahrenheit. Likewise, overcrowding could result in a poor tank environment. Also, if the oxygen level in your tank water falls below 8 ppm; it could make your fish inactive. As a result, they will oversleep. So, consider checking the oxygen level frequently. Ideally, you should avoid overstocking your goldfish tank in order to maintain good oxygen levels in the water. In addition, consider using an air pump to help keep your tank water oxygenated.

Why is your goldfish sitting at the bottom of the tank?

Of course, something is wrong with a goldfish sitting at the bottom of the tank all day. Often, the root cause could be stress due to poor water quality and bad diet. However, there are many other reasons for bottom sitting. For instance, maybe your fishy pet is suffering from a parasite disease, such as ich, velvet, fluke, and fish louse. Similarly, any internal bacterial infections like dropsy can make your fish inactive. In addition, your fish could hang out at the bottom of the tank due to constipation or swim bladder issues. In any case, keeping your tank water clean and disinfected could help get rid of most of the problems.