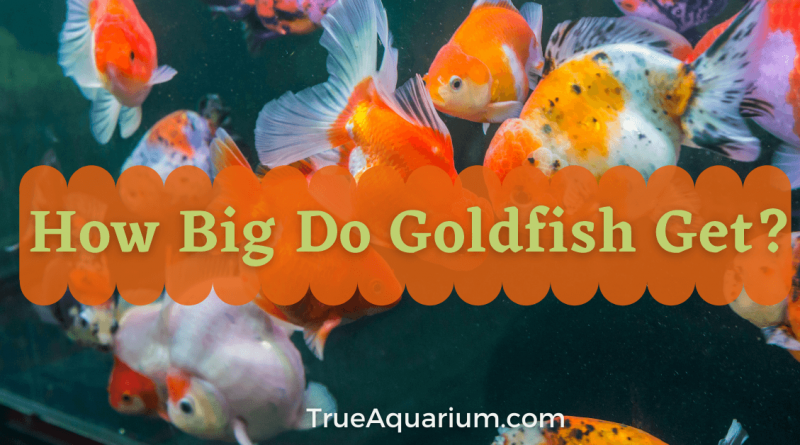 Often, you’ll see most pet goldfish are five to six inches long. This may lead you to think that goldfish cannot grow bigger than a few inches. However, a little research can quickly make you confused. For instance, a kiwi pet parent managed to grow their goldfish 18.7 inches long in 2003.

So, how big do goldfish get? Typically, the size of a pet goldfish is around five or seven inches. In comparison, the average size of goldfish in the wild is between 8 and 10 inches. However, goldfish have the potential to grow much bigger. Case in point, the 18.7-inches-long goldfish made it to the Guinness Book of World Records as the world’s longest goldfish.

So, now you may want to dig deeper into the topic. For instance, are you curious why some goldfish grow so big? Or, perhaps you want to know the best practices for growing a big goldfish. Or, maybe you are concerned that your goldfish could outgrow your tank size. For all this and more, please continue reading this article.

How much should a goldfish weigh?

Basically, a goldfish’s weight depends on many factors, such as its age and species.  However, a regular goldfish weighs around 8 ounces. However, it is possible for a goldfish to grow much heavier. For instance, the largest known goldfish in the United Kingdom, called Goldie weighed over two pounds. In fact, Goldie lived 15 years and was over 15.5 inches in length. However, don’t expect your regular goldfish to be that heavy. As stated earlier, the average goldfish should weigh about 8 ounces.

Why do goldfish get so big?

First of all, not all goldfish grow equally big. So, it often depends on their genetics. For instance, some goldfish simply have the genes to grow longer and bigger than others. In addition, environmental factors can play a major role. For instance, if the water temperature is too cold or too hot, it could hamper your fish’s growth. Finally, your goldfish’s growth depends a lot on your husbandry. Essentially, you don’t have any controls over their genes. However, you should give them the care they need to grow to their full potential.

How fast do goldfish grow?

Interestingly, goldfish continue to grow until they die. On average, an adult goldfish grows one inch every year. Of course, a baby goldfish grows faster than an adult goldfish. In fact, a baby goldfish experiences around 40% growth in the first few weeks of its life. Typically, your fish’s tail and fins should grow by the sixth week after its hatching. However, once your fish becomes adult, its growth rate slows. Thankfully, there are ways to make your fish grow faster. For instance, feed them several times throughout the day. However, don’t overfeed them. In addition, keep the tank water clean and warm. Essentially, little things like this can go a long way to help your fish grow faster.

Why do goldfish in the wild grow so big?

First of all, the water in the wild is much cleaner than the water in the aquarium. Additionally, rainfall and flow help keep the water well-oxygenated. Plus, goldfish in the wild have easy access to a wide variety of food. For instance, a goldfish can easily find animal matter, such as daphnia, brine shrimp, snails, and tubifex worms. Likewise, there is no lack of plant matter in the water. Finally, goldfish in the wild get enough space for their free movements. Ideally, you should mimic the same conditions in your aquarium. However, you know that it is easier said than done.

How big do comet goldfish get?

Often, people appreciate the long flowing tail of a comet goldfish. In fact, the tail actually looks like a comet, hence the name. In general, comet goldfish are smaller than regular goldfish. However, some comets can grow 12 inches or even longer. In fact, their growth will depend on the environment and the care they’ll receive from their pet parents. Ideally, you should keep goldfish in a large aquarium. In fact, experts recommend a minimum tank size of 50 gallons.

How big do fantail goldfish get?

Typically, fantail goldfish are very hardy. Unlike most other goldfish species, they don’t have fancy features, such as bubble eyes. Yet, they are very popular among first-time pet owners. In fact, they are well-known for their regal appearance and elegant fins. Often, if you look at them from above, their fins look like a triangle, hence the name fantail. In general, a fantail goldfish grows between 6 to 8 inches long. Also, they can have a long life compared to other species. In fact, most fantails will live for around six years. However, if you take good care, their lifespan can extend up to 10 years.

How big do fancy goldfish get?

How big do oranda goldfish get?

How big do black moor goldfish get?

Black moor is one of the most beautiful species of fancy goldfish. In fact, they are very popular among aquarium owners, thanks to their intriguing looks. In general, a black moor goldfish grows 8 inches long and can survive up to 20 years.

Do goldfish need a big tank to grow bigger?

Undoubtedly, a large tank is conducive to the growth of your fish. Of course, there are many other factors that impact their growth. However, the tank size can be the key differentiator. In fact, a small tank can prevent your fish from reaching its full potential in terms of size. Staying in an undersized tank restricts them from exercising. Even worse, a small, overcrowded tank can negatively impact the health of your fish. Ideally, you should keep one common goldfish in a 30 gallons tank. On the other hand, a 20 gallons tank should comfortably accommodate one fancy goldfish. Increase the size by 12 gallons per additional common goldfish. So, a tank of 54 gallons should suffice for three common goldfish. Likewise, add 10 gallons in tank size for every additional fancy goldfish.

What to feed your goldfish to make it grow bigger

Of course, a good diet is essential for growing your goldfish big. Typically, a goldfish needs a balanced diet. More specifically, the diet should include around 40% carbohydrates, 40% protein, 12% fats and 8% minerals. Importantly, a goldfish fry should consume enough protein foods, such as tubifex worms, snails and brine shrimp. However, make sure the live foods do not bring any diseases to your tank. Alternatively, you can give them freeze-dried foods. In addition, feed your goldfish vegetables, such as chopped peas, spinach and lettuce. Also, give them carbohydrate-rich flakes and pellets. Ideally, you should feed a goldfish fry more frequently than an adult fish. While adults need one or two meals a day, their offspring needs 3 or 4 meals daily.

How does water temperature affect a goldfish’s growth?

Typically, a goldfish grows faster in warm water. So, make sure your tank water is not excessively hot or cold. Ideally, you should keep the temperature anywhere between 71 and 75 degrees Fahrenheit. However, a goldfish fry prefers slightly higher temperatures than an adult goldfish. Also, a goldfish’s growth rate may slow down when the water temperature falls below 65 degree Fahrenheit. Granted, goldfish are hardy creatures but their metabolism could slow in temperatures below 65 degrees. As a result, your goldfish’s growth rate could get affected. So, keep your fish in warm temperatures. That way, you can improve the metabolism of your fish. Eventually, that would help your fish grow faster.

How does water quality affect a goldfish’s growth?

Undoubtedly, your goldfish needs clean water to live longer and grow bigger. In fact, poor tank water conditions can trigger serious health issues in your goldfish. Even worse, bad water can cause a goldfish to die earlier. Health issues aside, polluted water can also hamper your fish’s growth. For instance, a goldfish fry living in poor water conditions does not grow as big as it should grow. Thankfully, there are ways to prevent water poisoning. First of all, consider performing partial water changes every week. Secondly, keep the water filter clean. In addition, consider cleaning your water tank inside out every few months.