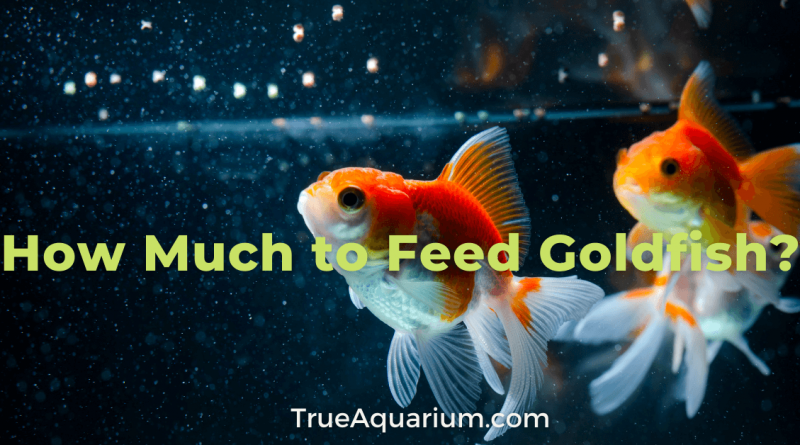 Often, goldfish owners are not sure how much to feed their fishy pet! In their defense, not all goldfish are created equal. So, different species may need different amounts of food. On top of that, you also need to consider external factors like water temperature.

So, how much to feed goldfish? In general, you should feed your goldfish as much as it can consume in two minute’s time. However, this works when you feed processed food, such as pellets and flakes. Just add food slowly to your aquarium for two minute and stop. Of course, the amount could vary depending on the size and species of your goldfish.

So, now that you got the short answer you may want to know more. For instance, why do goldfish eat so much? Or, what food is best for your goldfish? Or why are goldfish always hungry? Hopefully, this article will resolve most of your queries. So, keep reading!

Do goldfish eat a lot?

Of course, they do. In fact, goldfish are voracious eaters. Essentially, they’ll eat anything that fits their mouth. Often, overeating could trigger health hazards in them. For instance, your goldfish can get constipation or digestive problems from overeating. Even worse, goldfish can die from overfeeding. In fact, excessive food can block their intestines. As a result, they may die.

Why do experts advise against overfeeding a goldfish?

As mentioned, overfeeding can make your fish sick. However, experts also warn against the indirect consequences of overfeeding. For instance, overfed fish produce more feces. Plus, any uneaten food particles will gather at the bottom of your tank. Eventually, all that uneaten food and fish waste could make the water cloudy. Consequently, you could see algae overgrowth and contamination in the water. Often, this could result in a poor water environment and make your goldfish sick. In fact, cloudy tank water is one of the signs you are overfeeding your goldfish. Additionally, watch out for signs, such as fish flipping upside down while swimming, bad smell from tank water, and clogging of water filters.

Why are goldfish always hungry?

In truth, goldfish are not always hungry. However, they always behave like a hungry creature. For instance, you may find your fish foraging for food in every corner of the tank. Or perhaps, your goldfish would swim toward you every time you step in the room. That. However, doesn’t mean they are hungry. In fact, goldfish are naturally wired to look for food in the wild. So, it’s more like their second nature. Ideally, you should feed them at a fixed time daily. In other times, simply ignore their dance for food. However, some experts say goldfish are always hungry. In their defense, goldfish do not have a stomach. Consequently, the foods they consume do not make them feel full.

How often should you feed your goldfish?

Typically, feeding them twice or thrice a day should suffice. Also, the de facto norm is to keep a gap of at least 6 hours between two meals. However, some goldfish may need to eat more often than others. In fact, the right frequency depends on many other factors.

For instance, baby goldfish below age one need more frequent feeding for growth. Also, when your goldfish breeds, they need more food. In contrast, goldfish eat much less in low-temperature conditions. In fact, some goldfish start hibernating during winter. Hence, they hardly eat any food at that time. Finally, consider the fish-to-water ratio in your aquarium. Typically, 10 gallons per fish is a good ratio. If, however, your tank is over-crowded, consider feeding once daily.

What is the best time to feed your goldfish?

Thankfully, goldfish are not picky eaters. Plus, they don’t care when you feed them. Simply put, you can set your own schedule for feeding goldfish. For instance, you can choose to feed them once in the morning and once at night. However, make sure to maintain a schedule. In fact, feeding at fixed times of the day is best for their health. In addition, keep a six-hour gap between two meals. Interestingly, goldfish can live without food for a long time. So, if you skip feeding them once, don’t worry!

Do you need to feed your goldfish exactly what they eat in the wild?

In theory, their diet in captivity should mimic their diet in the wild. However, it is not a practical solution. For instance, goldfish in the wild often eat a combination of plant and animal matter. More specifically, they eat insects, worms, algae and aquatic plants. In essence, they need a balanced diet consisting of animal matter and leafy greens.

So, ideally, you should give them live food too. However, feeding live foods could transmit diseases to your fish in captivity. Alternatively, consider feeding them frozen and dried foods. For instance, you can feed flakes and pallets specially made for them. Plus, consider including some plant matter and boiled vegetables in their diet. Also, peeled peas are a good option. Remember, however, not to feed them vegetables with hard skin.

Why should you avoid feeding your goldfish any generic fish foods?

Should you feed flakes or pellets?

Often, the goldfish community debates over flakes versus pellets. So, which dried food option is better for your goldfish? In reality, each type has its pros and cons. For instance, flakes usually don’t sit uneaten at the bottom of the tank. Essentially, this makes it easier to keep the tank clean. However, flakes float at the top of the aquarium water. As a result, your goldfish may gulp air when consuming them. In addition, flakes could lose their nutritional value when exposed to air.

In comparison, pellets have a longer shelf life even when exposed to air. Plus, you can measure them more easily. So, if you want to measure how much food your goldfish is taking, pellets are a better choice. However, pellets often sink to the bottom. Hence, uneaten pellets could pollute the tank water.

How many pellets should your goldfish eat at each serving?

Importantly, pellets come in either floating or sinking type. So, first, decide which type you want to serve. As the name suggests, floating pellets float at the top. On the other hand, the sinking ones sink to the bottom. Evidently, the former is easier to consume for your goldfish. So, if you choose to feed floating pellets, two or three per serving should suffice. If, however, you give the sinking pellets, you may need to serve more. That’s because some of the pellets will sit uneaten.

How to feed flakes to your goldfish

In general, flakes float on the surface of your aquarium water. Consequently, goldfish come to the top to eat them. Often, they may gulp air in the process. Of course, that is bad for your fish. So, it is always a good idea to soak the flakes in water beforehand. That way, you can prevent your goldfish from swallowing air bubbles. In fact, gulping too much air could cause swim bladder problems in goldfish. Ideally, you should feed flakes once or twice a week.

What happens when you overfeed your goldfish?

Simply put, overfeeding could make your goldfish susceptible to certain diseases. For instance, goldfish could get swim bladder disorder due to overeating. In fact, swim bladder from overfeeding is more common than you think. Also, overfeeding means goldfish don’t get enough time to digest the foods they eat. As a result, goldfish may get digestive problems, such as constipation. In addition, eating excessive low quality foods could cause goldfish fatty liver.

How do you know that your goldfish is underfed?

In fact, goldfish do not eat every single day in the wild. However, a pet goldfish is usually fed two or three times daily. As a result, goldfish in captivity expect food every day. So, if you miss the regular schedule, they may get aggressive. Thankfully, there are signs that your goldfish are hungry. For instance, they may swim erratically across the tank. Or, you may notice them attacking other fish. However, just because your goldfish got aggressive doesn’t mean they are underfed. In fact, goldfish could get aggressive for many other reasons.

When do goldfish stop eating?

It is unusual for goldfish to stop eating. However, sometimes goldfish may actually stop eating. In fact, there are many reasons for them to do that. For instance, the food you serve could be large in size. Or perhaps, your goldfish diet lacks variety. In fact, always try to mix up vegetable and animal matter in their diet. Also, give them occasional treats. For instance, you can give them boiled peas. Make sure, however, that you remove the skin before serving. Finally, sometimes goldfish could not spot the food particles in a large tank.

How long can goldfish live without food?

Thankfully, goldfish are hardy creatures. In fact, experts say goldfish are capable of surviving without food for two weeks. However, try to feed them almost every day. Otherwise, your fishy pet could become weak. If, however, you need to go on a vacation, you can keep without food for one or two days. Alternatively, you can use an automatic feeding machine. In fact, these machines release a set amount of food at a fixed time every day.