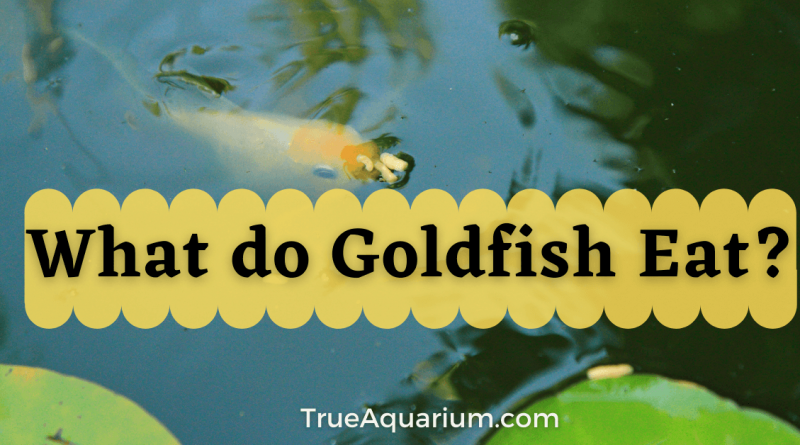 Goldfish owners are often not sure what to feed their fishy pal. In general, goldfish are not fussy eaters. So, they eat anything and everything that fits their mouth. However, that doesn’t mean you can feed them anything. In fact, the diet of goldfish in captivity should closely mimic their diet in the wild.

So, what do goldfish eat in the wild? Basically, goldfish are descendants of the crap family. So, it makes sense that their natural diet often resembles that of the crap.  For instance, goldfish in the wild would often feed on algae, plants, inspects, worms, smaller fish and decaying plant matter.

Where do goldfish live in the wild?

Typically, wild goldfish live in freshwater rivers, ponds and lakes. However, they cannot withstand strong water currents. So, they would rather live in water bodies that move slowly. Interestingly, goldfish can withstand a wide range of temperatures. In particular, goldfish can live in temperatures between 42 degrees and 82 degrees Fahrenheit. Usually, goldfish do not forage for foods at the surface level of the water. Instead, they’d scavenge their foods at the lower end of the water. Hence, they often find and eat plant matter and insects at the bottom of the water body.

How big do goldfish get in the wild?

In general, goldfish grow about one inch every year. However, their growth is most rapid in the first few months of their lifetime. Additionally, goldfish grow throughout their life. In fact, their growth depends on environmental and weather conditions. Interestingly, a goldfish grows faster during spring and summer, thanks to the warmer water. Conversely, their growth rate slows during winter. Unlike a pet goldfish, a wild goldfish can grow up to 14 inches in length. So, why does that happen? Mainly, goldfish in the wild get clear and well-oxygenated water. Additionally, their natural habitat is more spacious and has ample food supply.

How long do goldfish survive in the wild?

In general, the average life span of a pet goldfish is about five to ten years. As a matter of fact, members of the carp family are known for their long lifespan both in the wild and in captivity. All things being equal, a wild goldfish can survive up to 10 years. In reality, however, they are more likely to live for four or five years. Often, goldfish in the wild would die early from diseases, predation, or competition with other fishes.

What do goldfish fry eat in the wild?

Typically, a goldfish fry has a tiny mouth. Consequently, they cannot eat most of the food that an adult goldfish can consume. In fact, they mainly feed on liquid food in the first few weeks of their life. In addition, they can consume algae, tiny eggs, insects and leaves. Obviously, a goldfish fry in captivity should eat some similar items.

What should you feed your newly hatched goldfish?

First of all, know that a newborn goldfish doesn’t have a mouth. Typically, its mouth develops two days after its birth. Hence, do not feed them anything during that period. After that, start feeding them fry food three or four times a day. In fact, continue feeding them at this frequency until they reach the age of two weeks. So, what should you feed them during the first weeks? Well, you can feed them baby brine shrimp. In fact, brine shrimp is a staple food for most aquatic pets. Essentially, it contains enough protein necessary for the growth of a newborn goldfish. In addition, you can feed them algae and egg yolk.

Is eating algae good for your goldfish fry?

What should you feed your pet goldfish?

Granted, goldfish are omnivores but you should not allow them to eat anything. Importantly, goldfish need a balanced diet rich in both carbohydrates and protein. For instance, you can give them flakes and pellets that contain over 40% carbohydrates. Secondly, a high protein diet (over 40%) is very beneficial. For instance, you can feed them brine shrimp and other live animals. Thirdly, fibers contained in vegetables like lettuce can help improve digestion. Finally, a balanced diet should also contain10% fat, and 6% mineral content. However, you should definitely avoid grains like barley, wheat flour and rice as they contain gluten. In fact, gluten-rich food can trigger digestive issues in goldfish.

What should you feed your fancy goldfish?

What not to feed your goldfish?

Can you feed dry fish food to goldfish?

Clearly, flakes are one of the most popular dry fish foods. However, you have many other options, including pellets and granules. Additionally, dry fish foods come in different varieties to suit different needs. For instance, if your fish mainly swims around the middle and bottom of the tank, consider feeding them sinking pellets. Conversely, floating flakes or pellets are perfect for goldfish that mostly forage for food at the surface.

In general, goldfish should not eat human foods. However, there are some exceptions. For instance, both humans and goldfish can eat vegetables like spinach, green peas and lettuce. In addition, you can share certain seafood, such as shrimp with your goldfish. However, do not share cooked foods or fatty meat foods with your fishy pal. In fact, it is always a good idea to feed than freeze-dried foods.

Is gel food good for goldfish?

Undoubtedly, gel food is good for your fancy goldfish. In fact, gel food contains high levels of moisture content. Consequently, it is easy to digest for a fancy goldfish. Unlike flakes, gel foods do not pose any risk of swim bladder disease. Also, gel foods sink to the bottom, making it easy to scavenge them. In addition, the high-moisture gel foods closely mimic the wet foods a wild goldfish would eat in its natural habitat.

How to make gel food for your fancy goldfish

Thankfully, making gel food at home is easy. Firstly, buy power for making gel at any local store. Secondly, take filtered water and gel-making power in two separate containers. Importantly, make sure the ratio of water and power is 3:1. Next, boil the water and add the powder to it. After that, whisk the mixture until the ingredients are well-blended. Next, pour the mixture into molds of any pattern and let it firm up. Finally, keep the molds inside a refrigerator and you are all set.

How long can goldfish survive without food?

Unfortunately, you cannot carry your goldfish with you wherever you go. Hence, you may want to know how long a goldfish can survive without food. Thankfully, goldfish can live without food for around two weeks. However, leaving them without food for more than two weeks could be risky. So, make sure someone will feed them when you are on a long vacation. Alternatively, you can use an automated fish feeder. The feeder can be set to release a fixed amount of food at regular intervals.