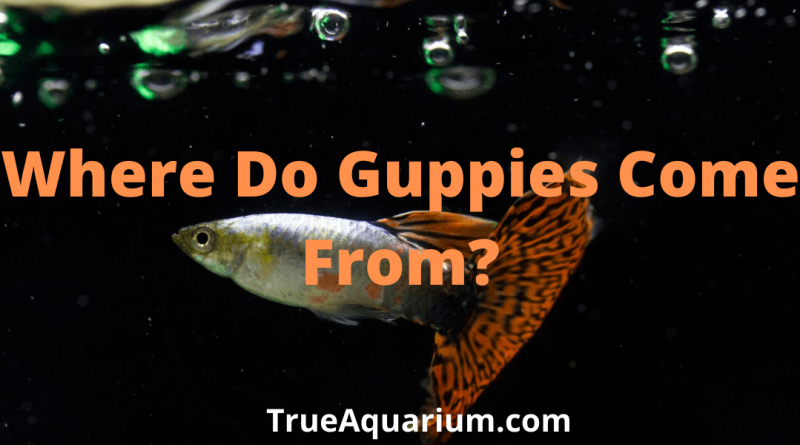 In many aquariums, guppies are the main highlight. These small creatures are known for their beautiful colors and for being somewhat easy to care for.

So, Where Do Guppies Come From? You might be surprised though to learn that these stunning fish are tropical species that live near South America.

This article will explore more behind the natural habitats of guppies and some ways you can care for them.

The guppy is a tropical fish that lives mainly near South America. Male guppies tend to be smaller than females but feature large dorsal fins. Unlike other fish, guppies are live-bearing and give birth to live young rather than eggs.

This fish is named after Robert John Lechmere Guppy who discovered it in 1866 while trekking through Trinidad. After their discovery, they were gathered and dispersed throughout the world. In fact, it’s believed that the guppy is now located on every continent except Antarctica. This was done as a way to help stop the spread of mosquito larvae (something they love) but soon turned into them being aquarium pets.

Where Do Guppies Live in the Wild?

Because they are a tropical fish, guppies can be found swimming near places like Antigua and Barbados, Jamaica, the U.S. Virgin Islands, and Trinidad and Tobago.

Guppies are freshwater fish and are usually found in lakes, ponds, and streams. Because they are so small, they don’t live in areas with fast-moving water. This is because they don’t have enough strength to swim against it.

How Long Do Guppies Live?

Most guppies live for about one to two years. However, some can have a lifespan of up to five years if they’re properly cared for.

Guppies come in a variety of different colors. While many are in their natural appearance, fish breeders have mixed different guppies together to create interesting color/pattern combinations.

The albino guppy is known for its red eyes but comes in most colors, except black. They have a wide tail and very poor eyesight.

Blue guppies come in various shades of blue. Most of the time blue female guppies will have a shimmery look on their fins.

The bronze guppy features a striking gold appearance mixed with black scales. Sometimes this type of guppy will also have a slightly red tint on their scales.

This guppy features deep red fins with a black body. Unlike other guppies, the half black red one has a significantly larger tail.

Is it Safe to Keep Guppies as Pets?

Some might be a little hesitant to keep guppies because of their tropical needs, but it’s very easy to keep these fish as pets. They tend to be so easy to care for that they are one of the most popular freshwater fishes to use in an aquarium.

However, keep in mind that if you have more than one guppy in the same tank, they could become slightly aggressive toward each other. While pretty sociable, if there is a fight for dominance or if there are too many males with females, it could cause a problem.

How to Care for Guppies

Guppies are very easy to care for. Below are some tips you can use to ensure they live healthy and happy lives.

Guppies have a vast diet so they’re pretty easy to feed. Some of their favorite foods are bloodworms, brine shrimp, spinach, and algae. It’s important to give them as much fresh food as possible. However, dried fish flakes can also be beneficial. These flakes have important vitamins and minerals your guppy needs to stay healthy.

When you feed your guppy, start slow. Too much food at once could make them sick. To begin, sprinkle a small amount across the top of the water. Watch your guppies as they eat. Once they finish the first batch, sprinkle a small bit more for them. Continue to give them small amounts until you see that they aren’t really eating anymore. This will indicate that they are full. The process usually takes around one minute. It’s crucial to not overfeed your fish when doing this. Not only will this make them sick, but it could prove to be fatal. If your fish eats too much it will result in an ammonia strike.

If you don’t want to constantly feed your guppies, you might consider adding an automatic feeder to the tank. You can adjust its settings so that it disperses a certain amount of food at various times throughout the day.

Because they are tropical fish, guppies need warm water to live in. Ideally, your aquarium should be heated anywhere from 72-78 degrees Fahrenheit. You can ensure the water stays at this temperature with the help of an aquarium heater. You can place this device on the side of the tank where it will monitor the water and heat it to your desired temperature.

Keep in mind that you need to carefully watch this device. If it heats the water too much, it will kill your fish. It might be good to invest in one that has an automatic shut-off feature to prevent this.

Make Sure They Have Enough Tank Water

Some fish owners simply fill up their tank to the top with water thinking this is enough for their fish. However, making sure your fish have enough tank water is a more intricate step than many realize.

It’s also important that you add a substrate in the tank. This helps to mimic the guppy’s natural habitat. It will also catch left-behind food that your guppy can munch on later. While there are a variety of different substrates available, the best to use for guppies is sand.

Sand is very easy to clean and replace if necessary. It also has fine grains, so if your fish happens to eat it, the sand won’t cause an obstruction.

You can use other substrates, like coral or gravel, but remember that these have their own problems. For instance, coral can change the water’s pH and gravel could cause your fish to choke if they try to eat it.

Guppies like to hide so it’s good to add plants and other hiding spots in the tank for them. Some of the best to use are java moss, water sprite, chain sword, and Amazon frogbit.

Besides plants, consider putting small objects like driftwood, terra cotta pots, or seashells in it. You could also purchase aquarium ornaments (like ships) to place in the tank.

You always want to make sure to clean the tank. If you don’t, it could make your guppy very sick. You’ll want to make sure to wash out the tank at least once a week. Most of the time, you won’t need to completely remove all of the water (just about 25% of it) and then replace it with dechlorinated water.

To remove any algae build-up, take a brush and run it along the bottom and sides of the tank. While guppies enjoy munching on algae, a build-up of blue-green algae can be very toxic. Not only will it give off a nasty odor, but it produces dangerous particles that could kill your fish.

One way to prevent the development of algae is to keep your tank out of direct sunlight. If you place the tank in the sun, it will warm up the water and create perfect conditions for algae to grow. To give your guppy adequate lighting, consider using artificial lights instead.

You might also consider installing a tank filter. Most guppy owners don’t usually put this in the aquarium because guppies don’t produce a lot of waste. However, a filter can make your cleaning job go by much faster. It will maintain the water quality so your guppies have a clean space to swim around in.

Guppies enjoy living with others so they need to have at least one or two companions in the tank. You can add some other guppies or different species like mollies, cardinal tetras, cory catfish, or honey gouramis.

As mentioned above, they are pretty sociable fish, but they can be a little aggressive sometimes. If you notice one fish chasing another often or some fish hiding, it could be a sign of this. You’ll either want to separate them or ensure there’s one male for every three females in the tank. Too many males will overwhelm females and all the males will try fighting with each other for supremacy.

Guppies are beautiful fish that are known for their sociable nature. Despite being native to tropical areas, they are simple and easy fish to keep in an aquarium. This makes them perfect for beginners and seasoned aquarium owners.