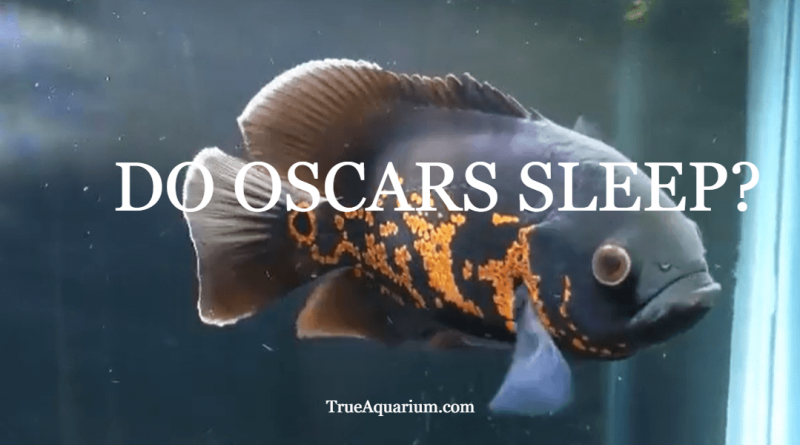 Many people think that fish didn’t sleep because their eyes are always open. The thing is, there aren’t any fish in the world that have the ability to close their eyes. Sleep in this species of animals is not about closed eyes but about rest. Mammals lay on the floor and close their eyes when they sleep. However, fish don’t behave in that way. They rather go into a sort of rest state that helps them gain their energy back.

Do Oscar fish sleep? Yes. Oscar fish can sleep. They have their own version of sleep and it mostly involves them entering a sort of sleep state or rest state. They do not sleep in the same way that humans and other mammals do.

The paragraphs following this will be spent talking about how Oscar fish sleep. It will explore their sleeping patterns and discuss in earnest what Oscars require to have a well rested sleep either they are in the wild or not. We will be answering questions as to whether or not Oscars lie down to sleep or if there are any special requirements that they need for their sleeping quarters.

Do Oscars lie down when they sleep?

If it is no cause for alarm, why then do Oscars lie on their sides?

Oscars, like a lot of cichlids out there, lie on their side when they enter the sleep state. Sometimes, it is out of their need to rest without even sleeping. There are however a cuplike of other reasons that an Oscar fish would lie on its side at the bottom of the tank.
Oscars are very social animals. They are also widely known for their intelligence and territorial behavior. There is an inevitable hierarchical situation amongst them. If you keep more than one Oscar fish in the same aquarium therefore, there is bound to be conflict except one Oscar submits. The sign of that submission in Oscars is the lying at the bottom of the tank action.

Another quite unexpected thing that can make an Oscar fish retreat and hide at the bottom of the tank is the interaction of humans. Oscars are very sensitive animals and it only makes sense that they feel intimidated by the human hands invading their home.

Fixtures on the tank

The hoses and the pipes definitely add to whatever sentiment the fish bad been holding. Nobody would be comfortable with having giant hoses and stuff in their home.

Do All Oscars Lay On down in this way?

No. The truth is that there are some Oscars that are docile. They are the ones who would cower and hide at the bottom of the tan. There are however Oscars with a lot of personalities. They are the no-nonsense bosses who would attempt to charge at you when they see you approach their tank. They may even go as far as giving your intrusive hand a nasty bite if you put it in their tank.

This category of Oscars would swim towards the glass seemingly angrily and flare their gills in an attempt to scare you off. Not this is not to say that some Oscars are strictly aggressive or strictly docile. Oscars’ behavior could change from mood to mood or from Oscar to Oscar. It could even be influenced by the presence or lack or of another fish.

As a proud member of the class cichlids, Oscars often stand out for their tendency to have very well developed personalities. That’s probably why they’re so popular in the aquarium hobby.

The sleep of Oscars

To be more detailed on how Oscars sleep and behave in their resting state, I would like to reiterate that the Oscar fish takes more of a siesta than actual complete sleep. The Oscar fish are nocturnal animals and thus you may only notice this behavior at night. It would withdraw to corners and hidden spaces behind rocks in the aquarium. He would try to hide behind or under them while it takes a moment to rest.

This behavior is very common amongst cichlids you could touch the tank lightly to see if your Oscar would respond. The fish may be power saving of it does not respond to your gestures. Oscars in the wild find somewhere to hide at night. This can be under rocks or amongst tree roots. They do this because they are trying to avoid getting eaten by some bigger fish.

Are there other occasions for Oscar lying down?

If you consider the fact that fish are forced to constantly swim, it is no surprise that they sometimes lean to one side and sit motionlessly. You may catch your Oscar sleeping during the day if you leave the aquarium lights on all the time. This is because the fish need darkness to tell them that it is time to rest. However, if you keep the lights on, they’ll miss out on their natural sleep hours and end up weak and sleepy during the day.

There are a lot of reasons might be sleep deprived. Sleep deprivation can make Oscar tired and restless or even fall sick and die. This is why it important to know the risk factors for this condition and face it head on.

If you are keeping diurnal fish like catfish with the nocturnal Oscar, you are likely to start trouble. This is because the catfish will disturb the Oscar at night and they may even make a lot of noise. The Oscar is not very timid creatures and therefore will respond in kind to whatever crazy thing the catfish comes up with.

In the end, neither the catfish nor the Oscar will get any good sleep and they may both be tired in the morning and eventually fall sick. The catfish can also grow significantly bigger the Oscar. This means that Oscars could become prey to the catfish. At the very least, they would disturb the Oscars’ sleep. On the other hand, things could get worse enough for the catfish to kill Oscar.

For some weird reason, plecs are attracted to the shilling shimmering body of the Oscars. And not in a sexy way. The plecs have a thing for sucking on the flesh of the Oscars when they sleep. So if you keep your Oscar and plecs in the same tank, you have to be conscious and watchful of the Oscars. If they develop holes in their sides, you may have to remove the plecs.

This is a situation where the fish feels cramped in the tank due to lack of enough space for it to swim around. This can be particularly worse if you have more than one fish in the tank and they have to fight for space or territory. We have already established that Oscars are very territorial animals. This means that they will fight viciously to protect their personal space. If the tank is too small, it may affect your fish’s behavior while sleeping. It could also cause the fish to attack each other as they will constantly be in each other’s way.

Tips for helping your Oscar get good night sleep

When to call the Aqua vet

Call the vet if you notice that your fish is constantly lying on his side and not swimming for extended periods of time. This could be an indication of an ailment. It is normal for Oscar fish to sleep at night. Oscars generally stay awake during the day and sleep at night. If your Oscar is sleeping all day therefore, call the vet.